DUE TO COVID-19 DICKINSON EMS HAS TEMPORARILY

What is the history of the Stop the Bleed® program and bleeding control?

In April 2013, just a few months after the active shooter disaster at Sandy Hook Elementary School in Newtown, CT, the Joint Committee to Create a National Policy to Enhance Survivability from Intentional Mass Casualty and Active Shooter Events was convened by the American College of Surgeons (ACS) in collaboration with the medical community and representatives from the federal government, the National Security Council, the U.S. military, the Federal Bureau of Investigation, and governmental and nongovernmental emergency medical response organizations, among others. The committee was formed under the leadership of trauma surgeon Lenworth M. Jacobs, Jr., MD, MPH, FACS, to create a protocol for national policy to enhance survivability from active shooter and intentional mass casualty events.

Because these meetings initiated in Hartford, CT, the Joint Committee’s recommendations became known as the “Hartford Consensus.” One of the recommendations of the Hartford Consensus was to turn bystanders into immediate responders at the scene of wounding before first responders arrived. This step would improve the survivability of victims with severe bleeding. As soon as the area became safe, these immediate responders could act to stop bleeding if they were properly trained in the bleeding control techniques.

That recommendation gained widespread recognition in October 2015 when Stop the Bleed, a national awareness campaign and a call to action, was launched at the White House. Stop the Bleed is intended to cultivate grassroots efforts that encourage bystanders to become trained, equipped, and empowered to help in a bleeding emergency before professional help arrives.

Today, the ACS Committee on Trauma (COT) is leading the effort to save lives by teaching the civilian population to provide vital initial response to stop uncontrolled bleeding in emergency situations. This effort is being accomplished by the development of a comprehensive and sustainable bleeding control educational and informational program targeted to civilians that will inform, educate, and empower the more than 300 million citizens of the United States. The BleedingControl.org website provides instructors and the public with training and materials free of charge.

Studies have shown that the help given by an immediate responder can often make the difference between life and death, even before professional rescuers arrive. The Bleeding Control Basic Course provides participants with the necessary tools to become empowered immediate responders.

What is the Bleeding Control Basic Course?

It is a maximum 90-minute course including a formal presentation and hands-on practice of direct pressure application, wound packing, and use of a tourniquet. The course was developed for a nonmedical audience to address the needs of the immediate responder to control life-threatening bleeding until help arrives

How do I find a class?

Visit the Find a Class search tool at BleedingControl.org and use the contact information included in each class listing to reach out to your local, approved instructors. If you don’t see any classes scheduled near you now, keep checking back—new classes are added every day. You can also reach out to your local EMS providers to see if they have an approved instructor already on staff or an eligible individual willing to register and teach the community.

At this time nationally recognized bleeding control classes are not available online.

How do I schedule a free Stop the Bleed training course for a group or for my upcoming event? 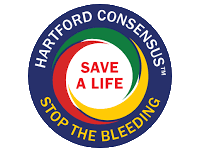